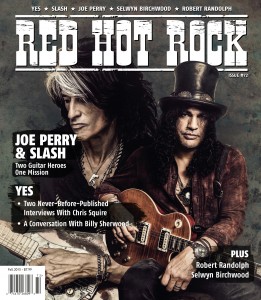 Aerosmith is America’s all-time most successful rock band. And Joe Perry has been upfront, playing lead guitar for the band for four and a half decades as one-half of the infamous Toxic Twins, acting as sparring partner to singer Steven Tyler, a man with whom he continues to share, enjoy and endure a love/hate relationship. The exception being a short period of time when Joe went out on his own with The Joe Perry Project during the late 1970s/early 1980s. Late last year, Joe released his autobiography, Rocks – My Life In and Out of Aerosmith, which comes out in October on paperback. The book is an unflinching look at the highs and lows of Joe’s life and career, touching on the inevitable and compulsory topics of sex and drugs. But unlike many other unfortunate memoirs in this literary genre, Rocks keeps the spotlight squarely focused on music, a reflection of the man about whom the book is written. As Aerosmith got ready to hit the road once again for The Blue Army Tour 2015 and as its Aerosmith Rocks Donington 2014 performance in England was being prepared for release, now was an optimal time for Red Hot Rock Magazine to catch up with Joe to discuss the contents of his first book, as well as all things Aerosmith.

RED HOT ROCK MAGAZINE: Hello, sir. How are you?

RHRM: It’s nice to hear your voice again. We are excited to be placing Joe Perry on the cover of Red Hot Rock once again.
JP: Awesome.

RHRM: I read your book ravenously from cover to cover. Such a great book. Such great insight into Aerosmith and all of the stuff you have done outside of Aerosmith.

JP: Thank you. That’s great to hear. Most people who have read the book have given us positive feedback. It’s the first one and there may be additions, but this is it. You know, we poured our heart and soul into this. So it’s good to hear that stuff. It really is.

RHRM: I was a huge fan of Aerosmith music from the ‘70s when I got into the band. But the first show that I was able to go see was on the Rock In A Hard Place tour while you were with the The Joe Perry Project and not with Aerosmith. Steven was collapsing onstage in between songs, the show was not good and I made a promise to myself never to see the group perform again. Ha ha. Well, you rejoined for the next album, Done With Mirrors, and I, of course, broke my promise, went to a show and I have continued to go see the band year after year and pick up everything you guys put out there.

To read the rest of this feature, go to: www.redhotrockhq.com

New single and video for “HEROES”