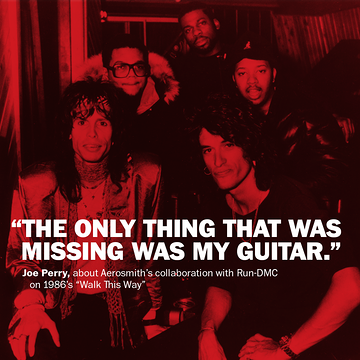 It’s 1986. Rap music is explosive and on the rise but still misunderstood and barely represented in the mainstream. The leading innovators are Run-D.M.C., a trio from Queens who sport black leather jackets and unlaced Adidas sneakers. Two albums into their career, Joseph “Run” Simmons, Darryl “D.M.C.” McDaniels and Jason “Jam Master Jay” Mizell are already minor stars and musical revolutionaries. For their third album, producer Rick Rubin, a 22-year-old white kid from New York University, comes up with a crazy idea: He recruits Steven Tyler and Joe Perry, the leaders of the down-and-out arena-rock group Aerosmith, to collaborate with Run-D.M.C. on a new version of their 1970s staple “Walk This Way.”

The rappers hate the idea. The rockers, struggling with drugs and low record sales, don’t know what to make of Rubin’s pitch. But on a Sunday in March, they meet in a Manhattan recording studio to create what will become one of the most important songs of the modern pop era. This is the oral history of Run-D.M.C.’s cover of “Walk This Way.”

It’s Dec. 15, 1974, and Perry, Aerosmith’s 24-year-old lead guitarist, is messing with a riff before a gig in Honolulu. He asks drummer Joey Kramer to play along. Tyler, originally a drummer but now the band’s singer, jumps up when he hears the jam.

Joe Perry: I was really into the Meters, the esoteric, funky kind of music. Sly and the Family Stone. I started fooling around on this riff. I asked Joey to play basic, straight twos and fours. Like an AC/DC song. If I had a drum machine I would have done it. And Steven heard it and I think he came up onstage and . . . sat down at the drums and played something a little bit different than Joey was doing. I’m not sure.