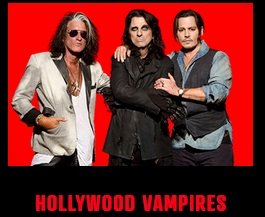 “The Hollywood Vampires (Alice Cooper, Johnny Depp, JoePerry) kick off the summer with their first U.S. festival headline show and also on the bill, their friend Marilyn Manson among others.

The Vampires make their worldwide television debut when they perform their new single “Bad As I Am” from their new deluxe album on the 58th Annual The GRAMMYs Awards®, Feb 15 on CBS. A super-group comprised of rock royalty and a Hollywood superstar, the Vampires will hit the stage offering fans a special surprise that will be a highlight of the show.”

Some Photos From The Grammys Rehearsals

Win a phone call from Joe!!