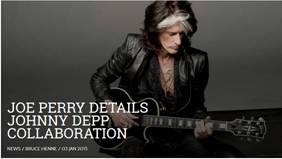 Johnny Depp played rhythm guitar on the Aerosmith axeman’s four-song EP, Joe Perry’s Merry Christmas.The set features versions of seasonal favourites  White Christmas, Silent Night, Santa Claus Is Back In Town and Run Run Rudolph.Already writing songs for an upcoming solo album, Perry found time to record the festive project after the autumn release of his memoir, Rocks: My Life In And Out Of Aerosmith. The guitarist explains how Depp’s musicality first appeared on his radar.