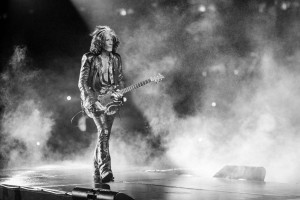 “Aerosmith played each song with the energy of an encore during the 90-minute show. The enthusiasm — from the band and the sold-out crowd — was palpable from the opener” –Christina Fuoco-Karasinski, BILLBOARD.COM, 6/14/15

“The members of Aerosmith returned to active duty Saturday in Glendale, launching their Blue Army Tour with a hit-filled performance at Gila River Arena that kept the ballads to a minimum and put the focus squarely on the spirit of their untamed youth.” –Ed Masley, ARIZONA REPUBLIC, 6/14/15

“The band ripped through ‘Draw the Line’ for its first song, after which [Steven] Tyler unleashed a massive, classic rock ‘n’ roll scream. It was a scream that said two things – Aerosmith would pump energy into the crowd the whole night, and Tyler’s voice hasn’t lost any of its edge throughout the years…The arena was loud, the band looked great, and Tyler reinforced his reputation as one of rock ‘n’ roll’s best frontmen…It showed that the essence of rock ‘n’ roll is ageless, and that even a relatively spectacle-free arena show can be entertaining as hell given the right talent.” –David Accomazzo, PHOENIX NEW TIMES, 6/15/15

“If their performance at Glendale’s Gila River Arena on Saturday night, June 13, 2015, the opening night of this year’s Blue Army Tour, is any indication, Aerosmith will not be relinquishing their crown as America’s greatest rock and roll band any time soon. For ninety five minutes, lead singer Steven Tyler, guitar ace Joe Perry, underrated guitarist Brad Whitford, cool bassist Tom Hamilton and non-stop drummer Joey Kramer, treated the near sell-out crowd to some classic Aerosmith (i.e. 1970’s blow your speaker out Aerosmith), familiar favorites (the late 80’s and early 90’s ‘MTV’ years) and even some deep cuts for the hard core fan. If there was any disappointment in the night, it was only because with Aerosmith, their time on stage can never last long enough. Any doubt that Aerosmith might have seen better days was erased with the opening number, ‘Draw the Line.’ As Hamilton played the song’s opening bass line, Tyler, dressed as only Tyler can, black pimp hat, dark glasses, scarfs, skin tight pants that nobody but Tyler could pull off, bounced past his bandmates and headed down the runway that extended into the audience. Followed closely by Perry, playing a mean slide guitar, the two did what Tyler and Perry do, electrify an entire arena…With Aerosmith, there is no wrong place to look. They don’t need fire or explosions or strobe lights to enhance their music. There are merits to watching each member of Aerosmith do what they do. Any further special effects might minimize what each of the band members do to contribute to the whole of the show…Once again, ‘America’s greatest rock and roll band’ lived up to their billing…For this night, Aerosmith made sure that the members of the blue army, both old and new recruits, were treated to the best of what Aerosmith can do. Long live the kings.” –Ted Hansen, EXAMINER.COM, 6/14/15